Hi Church,
A young Californian surfer decided to try out church for the very first time.  When the service was over, he met the pastor in the back, with surfboard in hand.  After the pastor asked him what he thought of the service, the surfer replied, “Church was cool!  Especially when the dude next to me handed me a plate of money.”

That’s why we stopped passing the plate on Sunday mornings.  Not really!  We stopped that practice around covid and to this point have chosen to not add it back in.  Frankly, I have mixed emotions around that.  Giving is an act of worship.  In that regard, it has it’s place in a worship service.

On the other hand, giving is private.  Giving is to be an expression of gratitude to our God.  Giving ought to flow out of a joyful heart and not because a plate is passed to us on a Sunday morning.  Paul says, “Each one should give what he has decided in his heart to give, not reluctantly or under compulsion, for God loves a cheerful giver” (2 Corinthians 9:7).  That one verse prompts several questions.
1) Is my giving something I have decided upon in advance to give?
2) What best expresses my attitude in giving- “I have to give?” or “I get to give?”
3) Do I give from a heart of joyful gratitude or from external pressure?
4) Why doesn’t this verse mention a tithe?

You can work out the first three questions, but to the fourth question, let me say this: Giving that is pleasing to the Lord is motivated by God’s grace.  Grace giving replaces tithing.  But, what about tithing in the Old Testament There was the Levite’s tithe that supported the priests, who had no land (Leviticus 27:30).  This ten percent was mandatory and to not comply was considered to be robbing God.

There was also a Festival tithe in which all the people were to bring a tenth of everything to these God-ordained festivals, feasts, and celebrations.  Kind of like a national “potluck.”  This 10% was required giving (Deuteronomy 12).  That’s not all.  There was a third tenth.  Deuteronomy 14:28 speaks to a tithe of every three years that was given to help the poor.  Since this was every three years it breaks down to about 3 and a third percent each year.  Again, this was not optional, but mandatory.

Required giving was 23%.  In addition to this 23%, there was opportunity for freewill offerings and first fruits giving, which was voluntary.  The only requirement here was that you give to the Lord the best and give to the Lord first.  It was a real test of trust to give the Lord off the top.  That is a principle for us today.  Can you trust God by giving to Him first believing that he will provide for you what you need (Matthew 6:33)?

Grace giving replaces tithing.  I dare say, that if followers of Christ gave in response to grace given, there would never be a shortage of money to support the work of God.  If we truly trusted God to provide for our needs, and that He is a God who will graciously give us all things, then our giving to God would not fluctuate with the circumstances.  Instead, we would see giving as a privilege and as a way to partner with God in building His kingdom.

Pause right now or jot down these verses to read later- 2 Corinthians 8:1-9 & 2 Corinthians 9:6-8.
I leave you with this, “For you know the grace of our Lord Jesus Christ, that though he was rich, yet for our sakes he became poor, so that you through his poverty might become rich” (2 Cor. 8:9).

“Thanks be to God for His indescribable gift.”  Pastor Brian

Link to This Sunday Worship Service 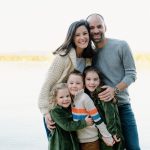 Ryan Barton is an entrepreneur, leader, and wisdom-seeker.  He is founder and CEO of Mainstay Technologies, an IT company that has won many awards including Best Companies to Work For, Business of the Year, and Torch award for Marketplace Ethics. Ryan was recently awarded “Entrepreneur of the Year” for his work in NH.

He is involved in developing charities. He is also the Chairman of the Board of Directors at Laconia Christian Academy.  Ryan seeks to work at the intersection of transcendence and practicality: He is drawn to the understanding and the strategies that help us each to awaken, transform, and experience goodness.  Ryan is husband to Trish, father of Chloe, Noah, and Olivia, and is an insatiable reader!

Ryan Barton will lead us through his story of brokenness and ongoing transformation. He will share his perspective and tools he has learned as he has pursued fullness in emotional experience, in business, in ministry, and in family.
Please join us Friday night, December 2 @ 7:00.

Listen to Podcast on: